Toronto was so fun! In fact, I was having such a time that I almost forgot to take blog pics. However, when we entered the distillery district, which is basically a bloggers dream with all the brick and stone walls, I had to take a few. 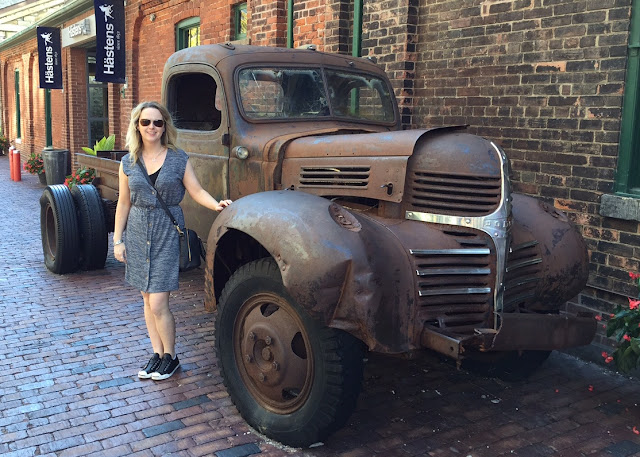 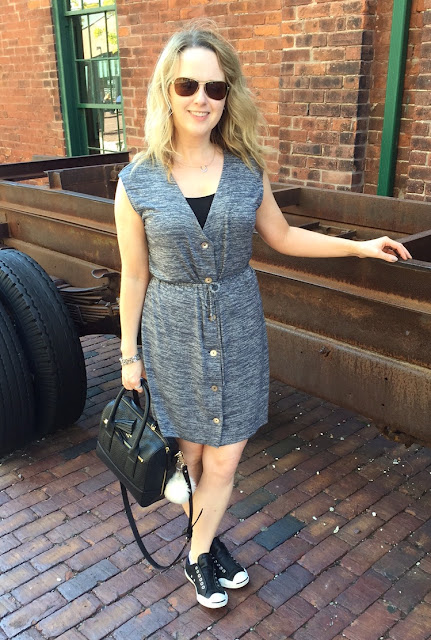 For dinner out that night, I fully opened the dress (to make it like a long vest) and put jeans on with it. I also switched into sandals. I'm going to do a post later on how I packed my carry on and planned my outfits so I took was little with me as possible. 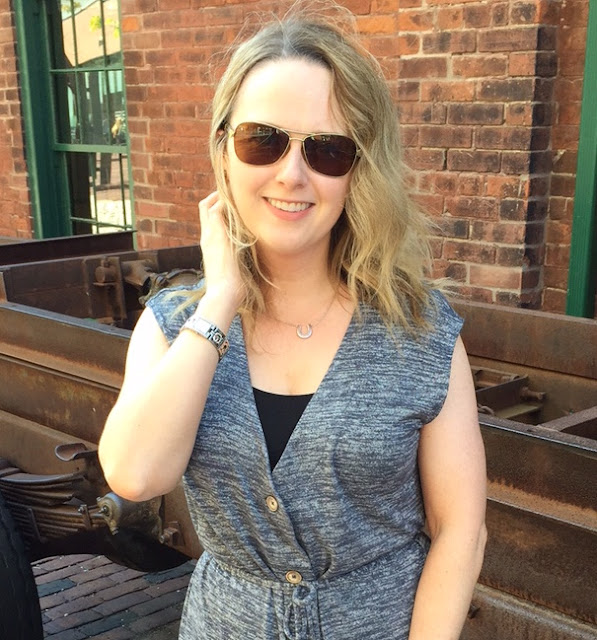 R and I met up with my BFF for lunch at Mill St Brewery. The food and drinks were excellent! I had a club sandwich (adventurous, no?) and a raspberry lemonade (some sort of beer and juice concoction that was yummy).

BFF and I spent some time browsing around Queen St West (hello Brandy Melville and NYX Cosmetics) and then moved on to Saks where we swooned over the Jo Malone perfume counter. I love visiting Toronto!

Justin Bieber : First Step to Forever, My Story - Justin did this book pretty early on in his career. It was a good read, but if you've watched the movie Never Say Never, you already know a lot about his early days.
The Nest - a solid summer read. It was not quite as good to me as it was hyped up to be, but I did enjoy it.
Travels With Bertha: two years exploring Australia in a 1978 Ford station wagon- This book was full of déjà vu for me. I wished it were longer as a lot of the places in Australia that were visited by the author were places I saw as well. I couldn't get over that he only wrote a few pages on the place that was in my opinion one of the most interesting in all of the country - Magnetic Island. One thing he said that really stuck with me is how hard it is to say goodbye to the people you meet when traveling, as most of them you'll never see again. They say that if you travel with someone for a week, it feels like a month, which is totally true. I was beyond lucky to have traveled with  the best people. Even if we don't keep in touch often, I think of them all the time.
I'm also in the midst of fall fashion issues. The best time of year for magazines! 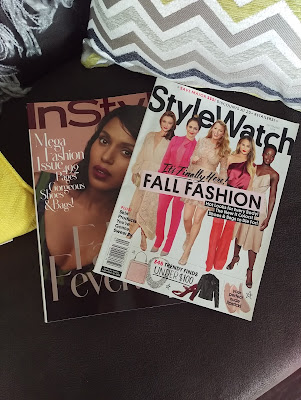 Packing list for Toronto. Blog posts once a week for now.

I'm finding new channels to subscribe to on You Tube. Fall fashion is on the horizon so ive been checking out my usual fashion sites.

Like the rest of Canada, I tuned into TheTragically Hip's last concert last night which was so good and so sad. I grew up with The Hip and they were considered my favorite band for a good three years from 16- 19 or so. I cried at least five times during the show. Bachelor in Paradise has been on a lot in our house #teamnick. I watched some Olympic action too. I loved cheering on our local lady- Ellie Black in gymnastics.

Too much! Summer will do that to me! We had some snacks and drinks on the clubhouse deck at the golf course last night. I've also been to the Stubbirn Goat beer garden on the waterfront a few times in the past few weeks- so good! We had dinner at La Frasca last week and dessert at Sweet Hereafter, both are always excellent. 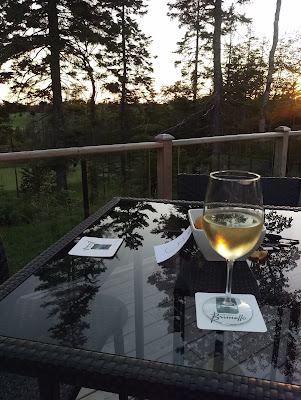 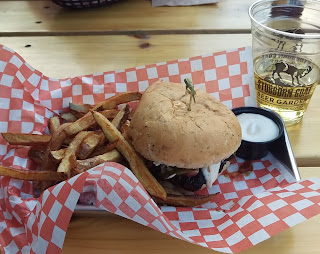 A bunch of stuff set aside for Toronto. I'll be flying with only a carry on for the first time. I like a good challenge.

The washing machine going. We're on time of day savings for power so we try to get laundry done on the weekend.

The sunscreen I put on today.

Tired! We spent a good part of the day outside and the sun makes me sleepy!

Getting away for a long weekend in Toronto. This week I will be seeing both of my best friends (separately). It's so rare that I see even one of them - two is epic!

Email ThisBlogThis!Share to TwitterShare to FacebookShare to Pinterest
Labels: currently, The Links at Brunello, The Stubborn Goat

I'm trying out a new type of post, which I hope will also be helpful to me. You see, I have the bad habit of collecting too many products. I'll be halfway done a product I actually like but will buy another product of the same type because I "just need to try it". The problem is, I won't finish the first product, so then I end up with ten concealers. And then I cry... and then I need more concealer. Just kidding!

I'm sharing with you the products that I've finished, and I'll let you know if I like them enough to repurchase. I'll also throw in some products that are not finished, but I'm not using, so to the bin they go!

First up is Bath & Body Works. I'm sure I will always have a good portion of my empties from this brand because we use their hand soaps and candles all the time. 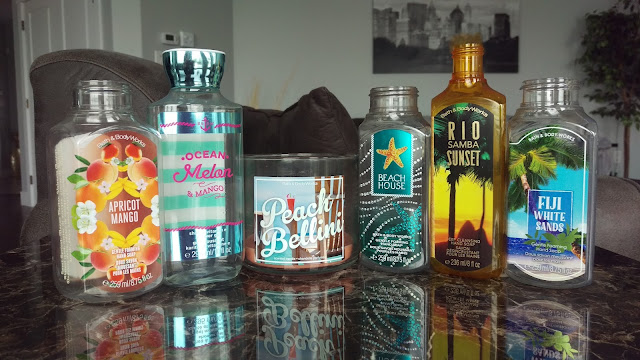 The hand soaps we recently used up were all ones we liked. I find with hand soaps, you generally always like them because you can smell them in the store and they usually translate into the same smell on your hands. We like the foaming ones better than the gel type, EXCEPT in the kitchen I like the gel better. I also used up a shower gel (Ocean Melon and Mango) which was really great smelling. The candle (Peach Bellini) was fantastic and really threw the scent well. Sometimes I love the smell of candles but find that the scent doesn't travel far enough through the house. 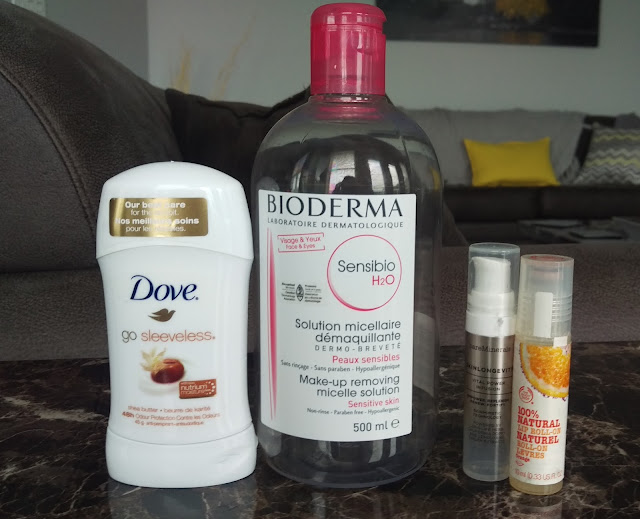 The Dove antiperspirant I was not a fan of. I used it for a few days and then went back to my usual which is Secret (the click up gel in either vanilla or cocoa butter). The Bioderma micelle solution is THE BEST makeup remover I have ever tried (Thank you Sara at Girl Met Blush who always helps me with my SDM hauls!) I have several other types of make up remover I need to use up before I open my second bottle of Bioderma, but I doubt I will like the others more. The Bare Minerals Skin Longevity is a serum sample I think I got as a 100 point reward at Sephora. It was nice, but not life changing. However in reading some reviews on the Sephora website, people are saying you have to use it for a few weeks before you notice how it's working for you.  The Body Shop lip product is barely used. I just didn't like how it felt on my lips. 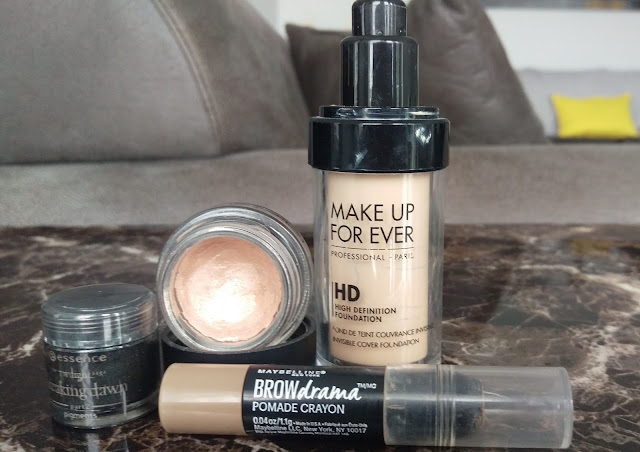 The Make Up Forever HD foundation is empty despite how it looks. I really love this foundation, but lately I have been trying to find more affordable alternatives. I'm currently using both Clinique Even Better or Maybelline Fit Me . The Mac Paint Pot in Bare Study is dried up (see how it cracked around the edges?) I used this for literally years almost every day as an eyeshadow - it lasts forever. However, I've totally gone off shimmery eye colors so if I bought another Paint Pot, I'd get a matte one. The Essence pigment was a whim purchase a few years ago that I never used. I'm not sure why I felt I needed a charcoal shimmery shadow as I'm not into dark eye looks on me. Maybelline Brow Drama Pomade Crayon was a product I really enjoyed. It is easy to use and made my brows look done without looking over done. I'd definitely consider buying this again after I use up the other four brow products I'm currently using.

I hope you enjoyed peeking at my garbage/recycling! I'll do another post once I have enough empties to tell you about. Enjoy your week!

The worst of the Smondays is when you're coming off vacation. A lovely, fair-weathered vacation it was.  Intentionally low-key. I had a nice balance of solo lounging on the deck with my book, catching a bit of sun (SPF'ed to the max), and spending time with friends and family.

This was an outfit I wore shopping with my mom and then out for a casual dinner with both parents. I've done so few outfit posts lately that I'm really rusty! Forgot the accessories shot, forgot to stand at another angle, forgot to check my hair (the humidity is problematic). 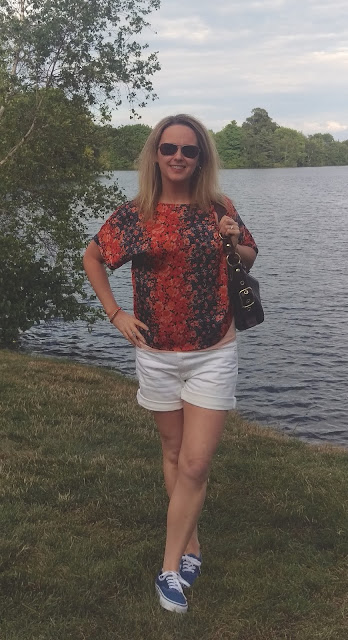 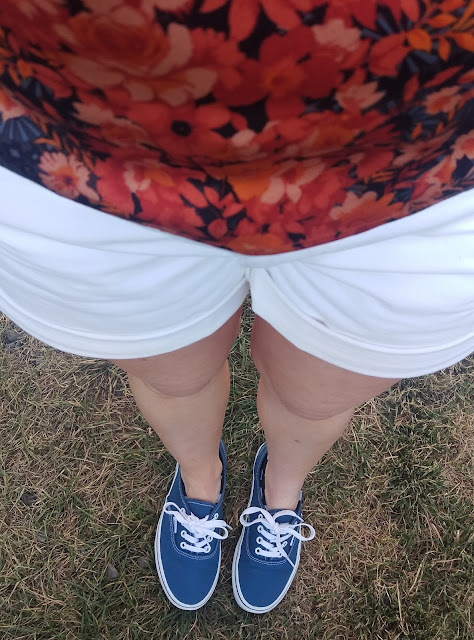 Turns out, Chucks socks fit into Vans too. Great news for my feet - the Vans weren't going so well without socks!

I rolled ahead $6 from last quarter, and I was successful in filling two of my wishlist items (White jeans and Vans).

Jeans: Gap
Reg $80, on sale for $35
I love white jeans in the summer, and my trusty ones from Joe Fresh had seen better days. White jeans tend to need replacing every few years for me. 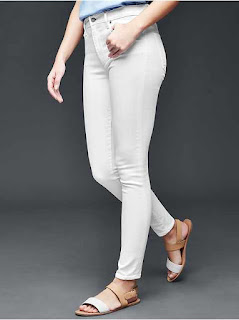 Shirt: Gap
Reg $45, on sale for $15
This was a bit of an impulse buy, because it was so soft. It's great for when the temperatures cool off in the evening. Don't forget to check the mens' section for shirts - this one was made for the guys.


Tank: Gap
Reg 25, on sale for $8
I love long thick tanks. This one is no exception. Mine is dark blue with tiny white stripes. 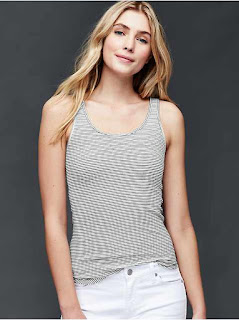 Dress: Gap
Reg $70, on sale for $18
I always gravitate towards long button front dresses because a lot of them can also be worn as an open over-piece. This one is slightly big on me (my true size was gone) but it works as long as I belt it. 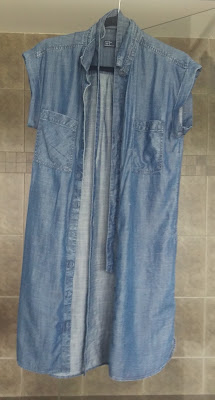 Shirt: Hollister
Reg $18
I rarely go in Hollister, but I was attracted to this shirt as soon as I saw it. I like how it's fitted and mock neck. It should look great with some of my higher waisted bottoms. The white one was too see-through but the grey one works. 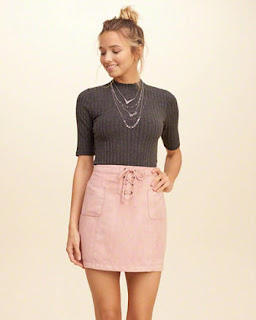 Shoes: Vans via Little Burgundy
Reg $65, on sale for $32
I've been eyeing Vans for a while. I've also been wanting a pair of blue shoes for summer considering I wear my blue combat boots so much in the cooler months. At half price, these were a no brainer. However... they are hard on the heels for now. They definitely need to be broken in - with socks. 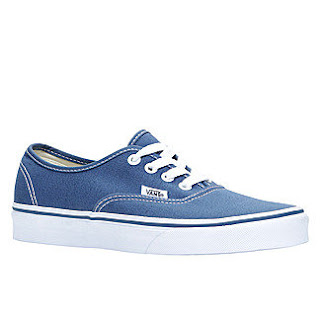 That leaves $380 for me to spend this quarter. On my wish list - nothing too specific. I'll be hitting up downtown Toronto later in August so will probably be picking up a few (and I mean very few as I'll be traveling with a carry-on) pieces from TopShop and Zara.